Home Who We Are Fred Habegger Bio 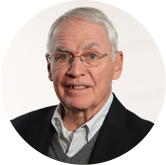 Chairman of the Board

Fred Habegger Jr. joined The Habegger Corporation in 1963 after graduating from the University of Cincinnati and after a successful stint in the United States Coast Guard.

Beginning in 1970, he served as President and CEO for 33 years. During that time and like his father who founded and ran the company before him, Fred’s commitment to serving customers first resulted in company expansion and market credibility as a customer-oriented, single source distributor. Beginning in 2003, Fred assumed the role of Chairman of the Board of The Habegger Corporation. Fred has served as President of the local ASHRAE Chapter, as well as President of Kenwood and Belwood Country Clubs.

Fred resides in Cincinnati, Ohio with Nancy, his wife of over fifty years. He remains young at heart and vibrant by playing golf and keeping track of his 17 grandchildren and 2 great grandchildren.